Welcome to the School of Economics at Henan University

Today, the school of economics offers undergraduate, graduate and Ph.D. programs in economics in its departments of Economics, International Trade, Finance, Public Finance, Insurance, and Statistics.

The school of economics is dedicated to excellence in teaching and research. Our faculty members are active researchers that regularly publish in well-known international journals such as China Economic Review, Macroeconomic Dynamics, and the Journal of International Money and Finance, but also participate in leading national and provincial research projects in China.

We hosted international and national conferences in Kaifeng, among them the HenU / INFER Workshops on Applied Macroeconomics and the Henan Symposium on Development and Institutional Economics.

The School of Economics expanded its international focus in recent years through various activities. Among them are close cooperations with universities in the US, Europe, Canada or Japan for student exchanges as well as research collaborations, special economics classes that are exclusively taught in English, but also the recruitment of new (often foreign) faculty members with an excellent educational background from the US or Europe. We are welcoming international students on all levels to study in our Economic programs taught in English.

Kaifeng is located in the east-central part of Henan province in China. It has today a population of 1 million in the city center and about 5 million in the metropolitan area (Kaifeng County).

The city was one of the seven ancient capitals of China during the Northern Song Dynasty (960 – 1127) with a population of 600,000 – 700,000. During that time, Kaifeng was the most prosperous and busy city in China and the world.
Unfortunately, vicissitudes of war and floods destroyed many of the ancient buildings. The Iron Pagoda (1049) is the oldest landmark in the city measuring 54.7 meters (179 ft.) in height. However, many of the historic buildings were rebuild accurately in the last 40 years.

Chrysanthemum is the flower of Kaifeng. The city holds every year in October the Kaifeng Chrysanthemum Festival with different chrysanthemum flowers in all scenic spots but also at major intersections and buildings in the city. 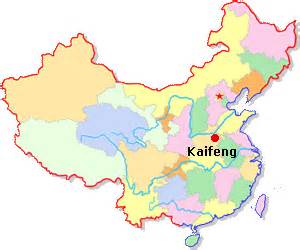